In the community of Löchgau in Germany, ASCA has designed and implemented a ‘solar tree’ for construction company STRENGER Bauen und Wohnen.

The solar tree produces electricity for the e-bike charging stations of three apartment buildings in a senior-friendly living residential complex. The project demonstrates the flexibility of ASCA’s organic solar films.

“With conventional technology, the individual shapes of the solar modules would not have been feasible,” said Hermann Issa, ASCA Senior Vice President of Business Development & Project Management, who also designed the solar tree.

The 2.5 m-long solar modules of the 6 m-high installation are made of organic solar films. ASCA laminated these with polycarbonate in cooperation with BGT Bischoff Glastechnik.

ASCA prints the organic photovoltaic cells (OPV) onto thin films using a special process. Green-coloured OPV films were used for the solar tree but the films can also be produced in blue, red and grey. The flat steel components of the solar tree were manufactured by the Kirchknopf metalworking shop, which also handled the onsite installation. 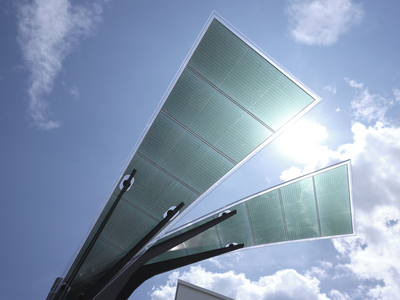 “The overall design of solar modules and steel elements takes up the formal language of the surrounding buildings’ design and reflects the innovative character of the residential complex,” said Issa.

In addition to designing the system, ASCA also planned the system integration. The solar tree stands on the ceiling slab of an underground parking garage, where the other system components, such as the inverter, are located. If no e-bike is connected to the charging station, the electricity is used for the general power of the underground garage and the outdoor area.

The energy tree was created as part of a competition held by Löchgau.

“To implement a tree that provides energy, we found an excellent partner in ASCA, who had already created a concept proposal for us after only two meetings,” said Maren Gerhäusser, who was in charge of the solar tree at STRENGER. “Our cooperation with ASCA was excellent as it also was with the Kirchknopf metalworking shop, which supplied the ‘trunk’ and the ‘branches’ of the tree.”

A Guide to Sustainable Napkins for the Eco-Friendly Home

As more countries pledge to achieve net zero carbon emissions, there will be a greater reliance on renewable energy sources such as wind turbines...

NSW hospitals generate approximately 52,400 tonnes of waste a year, which costs the NSW Government at least $16m in disposal. Now, a NSW Circular...

20 Sustainable Underwear Brands that are Affordable and Comfortable

In the community of Löchgau in Germany, ASCA has designed and implemented a ‘solar tree’ for construction company STRENGER Bauen und Wohnen.The...

The regularity and intensity of extreme weather events in 2021 has once again thrown the climate crisis into the spotlight and brought the impacts...

Where states and territories lead, national governments can follow

A recycled concrete solution developed by researchers at the University of Tokyo could reduce emissions from the construction industry. Calcium...

In partnership with the Clean Energy Council, All-Energy Australia will host a free-to-attend Virtual Conference from 19 – 28 October, featuring 11...

Stockland Evergreen in the south-east Melbourne suburb of Clyde is set to use more than 19,000 tonnes of Downer Group’s road surfacing material...

October 8th, 2021SIB: We Have Solutions! (Season 3, Episode 5)“Indigenous people must be part of the solution to climate change, this is because...

Amazon DeforestationWhy do Academic Theories Fail?A few days back was having a couple of beers with friends and enjoying a discussion. During the...

What Does the OEKO-TEX® Label Mean? (And How Its Label Check Tool Is Increasing Transparency)

The Coziest Sustainable Sweaters for Fall 2021

Tyre Stewardship Australia (TSA) is urging local governments, farmers and commercial landlords to be on alert as the federal government’s waste...

A flexible electricity grid based on energy storage and thermal balancing plants will enable Australia to capitalise on its unparalleled renewable...

How can Australia become a renewable energy superpower?

What is Viscose, and is it Always Unsustainable?

Oral-B has announced the launch of DROP SWAP SMILE— a nationwide initiative with Veolia and Shaver Shop that gives Australians a new way to dispose...

ABB has launched its Terra 360 all-in-one electric vehicle (EV) modular charger that can deliver 100 km of range in less than 3 min. Suitable for...

October 1st, 2021SIB: Food Sovereginity Matters“Humans are very funny creatures, when the tummy is empty we have just one problem, once its full we...