Australia’s biggest brewery, at Yatala on the Gold Coast, is brewing beer with the Queensland sun after the installation of what is believed to be the biggest solar project at any brewery in the country.

Around 7000 solar panels, spread across a whopping 15,000 m2, will directly harness the Queensland sun to produce Australian beers including Great Northern, Victoria Bitter and Carlton Draught. The 3.01 MWp system on the brewery’s rooftops is one of the biggest installations of its kind in Australia, according to Yatala Brewery Plant Manager Tom Robinson.

“Queensland is beautiful one day and perfect the next, so it makes sense to harness that perfect weather to make perfect beer.

“We’re committed to making the Yatala brewery more sustainable and estimate the solar we generate will be enough to brew the equivalent of around 150 million stubbies or cans each year.

“The beer itself won’t change, with the same ingredients and brewing methods used. Only now when the sun’s making you hot, it’ll also be making you a cold one.” 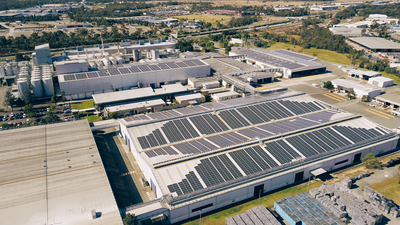 The installation took 18 months and was completed without interrupting brewing operations. More than 150 km of cable were laid — enough to run from Yatala to Brisbane at least three times over — and more than 20 people were employed on the project.

Yatala is owned and operated by Asahi Beverages, which last year acquired Carlton & United Breweries. This project is a significant step towards Asahi Beverages achieving its ambitious sustainability target of sourcing all its electricity across the country from renewable sources by 2025.

“We’ve covered virtually every bit of available roof space at the Yatala brewery with panels,” Robinson said. “While it’s not enough to power the entire brewery, our goal is to ensure Yatala is powered entirely by a mix of directly-sourced and offset solar electricity within four years, in line with Asahi Beverages’ targets.

“This project will reduce the carbon emissions in Queensland by around 100,000 tonnes over the next 25 years as Asahi Beverages seeks to reduce its carbon emissions by 50% by 2025. It’s quite ironic that the largest brewer of solar-powered beer sits on the former Power’s Brewery site.”

“We’re very proud of what we’ve achieved with Asahi Beverages,” Stenning said. “Working in amongst an operating brewery of this size had its challenges, [but] we delivered the system with no interruption to the facility.

“Asahi is at the leading edge of a quickly emerging trend among organisations to embrace ambitious projects that realise economic benefits for the business while reducing the environmental impact of business operations.

“The scope of it is amazing and sets the standard for breweries globally. We believe it’s Australia’s fifth largest ‘behind the meter’ solar project, meaning it’s one of the largest in Australia where power is not fed back into the grid but rather used onsite. We are extremely impressed by Asahi Beverages’ commitment to take on a solar project of this magnitude.

“To give some scope to its size and scale, the central solar control room is so large it was escorted by police to site.”